So I need to apologise for not posting in about a week and a half....first up I was busy with work and friend's birthdays and then  became horribly ill. It started on Sunday (hence no Sunday Roundup) but I thought maybe I was just feeling under the weather from the night before (meal out for friends birthday....where there was a free bottle of Champagne on offer....uh oh!) However it turned into severe swollen glands, which ended up with me being sent home from work and having to call in sick the next day (I feel that I should point out that I NEVER call in sick just because I never feel like I'm really sick enough you know? I once went into work after falling over in the shower and hitting my head really hard on the bath. Cue standing on tills feeling tired and woozy and my manager having to take me to the office and make sure I didn't fall asleep until I could get picked up! What a tit I was to go in right?? Also an idiot for falling over in the shower in the first place. Anyway, you get the idea...) However, my glands were so swollen that I wasn't able to talk much without being in an intense amount of pain and every time I had to swallow I made a face that customers most certainly would be put off by! Haha! I'm feeling a bit better now (no more hot and cold sweats for me! Yay...) but my left side is still pretty painful and it's causing the most annoying earache too. I love being ill.... Anyway, I don't have work at all this weekend so hopefully I'll be fine for my training next week.

So the point of this post is to give you a review of the new liquid bronze highlighter that Benefit are coming out with on the 21st of May (although some stores may have it by the 19th and we've been told to put it out then if we can!) Basically my manager Lizzie, went on some training on Tuesday and got a freebie of this for me and kindly gave it to me before she sent me home on Wednesday. Sometimes the perks of my job are quite nice! I had a little swatching session and took these photos....and then promptly fell asleep for a 3 hour nap (the perks of being ill!) So....on with the review! (apologies for the quality of the photos compared to normal, I decided to use my phone rather than my actual camera. Hopefully they won't be too bad!) 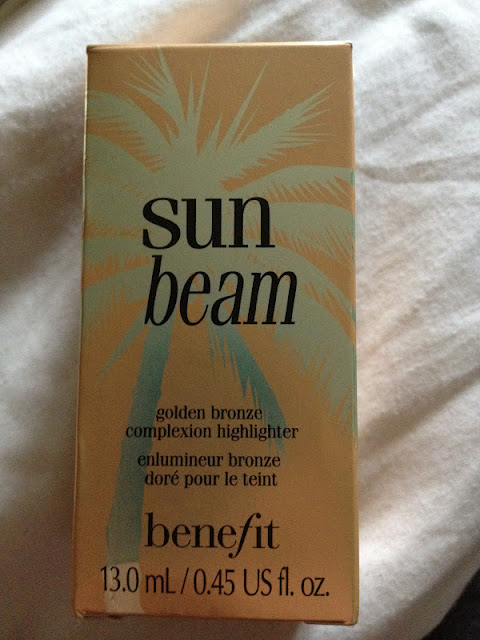 The packaging is pretty similar to that of Moon Beam, just with a palm tree in the background rather than a crescent moon. You can see that it's the same size bottle as High Beam, Moon Beam, Benetint, Cha Cha Tint and Posietint - 13ml.....so if you're a Benefit addict, it'll look nice with all your other bottles ;) 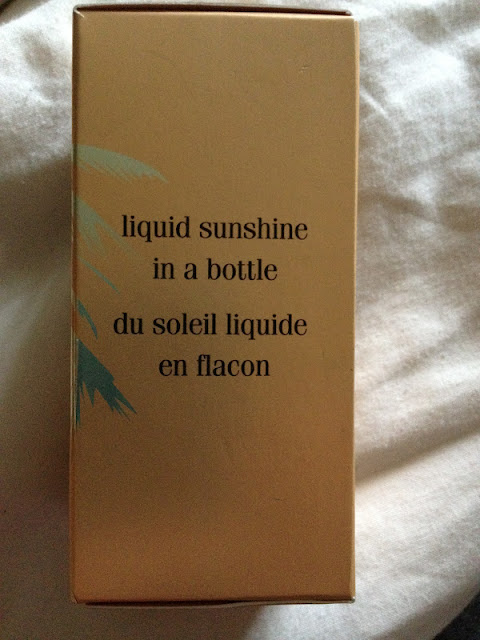 Here is a lovely shot of the side of the box....I'm not 100% sure why I thought you guys might like to see this but apparently ill/sleepy me is thorough! 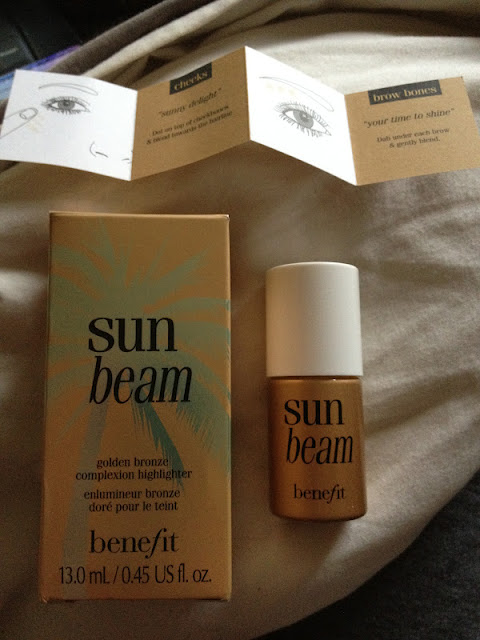 So like most of their products, Benefit have included a little guide as to how to use this. I do find that we get a lot of first time make-up buyers buy things on our counter and I do think these little "how to" guides can be very helpful for them. I know that even now I'll sometimes get a product in a beauty box and think "what the heck is this for?!" so I think it's a nice little edition. I always think that the size of some of the boxes are a bit ridiculous for our products. I know I get a bit disappointed buying a product and finding out that half of the box is just air really, but I guess it depends if you're a "keep the box" kind of gal. Some products I do and some I don't but I always think these bottles look tiny compared to the box! I've also noticed that since Benetint, none of the bottles are clear. It's a bit of guess work to know how much you've got left! Pro tip: always shake these bottles before use. If they are left in warm places they can separate and a good shake should make it the right consistency again (our counter is under a ridiculous number of lights! We constantly have to change our Porefessional testers due to them warming up too much. Very annoying!) 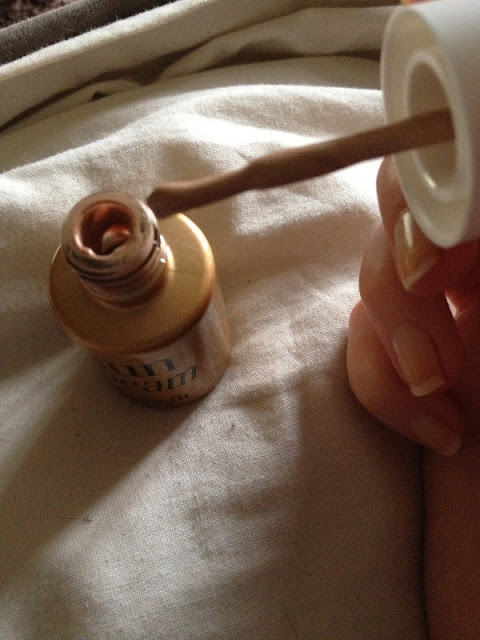 So like all the other bottle products, this one looks like nail varnish again! I know some people hate this and when I'm on counter I will ALWAYS use one of our foundation brushes to put the bottle products on someones face. It's easier for me and more hygienic too (I don't have to use my fingers to blend this way.) You can use the brush provided and blend with your fingers if you wish but I found my fingers were quite shimmery after doing that myself, also I just prefer the overall look of blending with a bigger brush as I feel it gives a nicer coverage and look. (You can also tell that I've been ill as you can see my bare nails in the background! Shocking!) You can also mix this with your moisturiser or foundation for a nice dewy look as well apparently but I haven't tried this so I can't be sure what the result is. 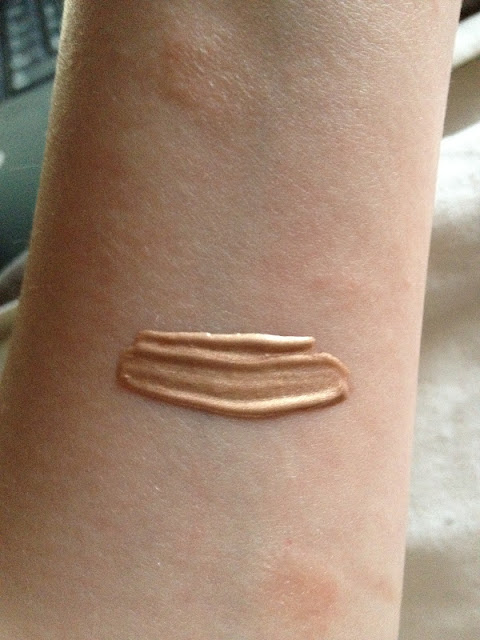 So this is a quick straight from the bottle swatch. You can see (maybe?? Man this camera is bad compared to my usual one!) that it doesn't have the same pinky tone as Moon Beam and is more golden instead. It's quite thick so a little bit really does go a long way. It's a lot like High Brow Glow in terms of colour so I think those two products will go really nicely together and will be a big hit for Summer (if it comes back again...) 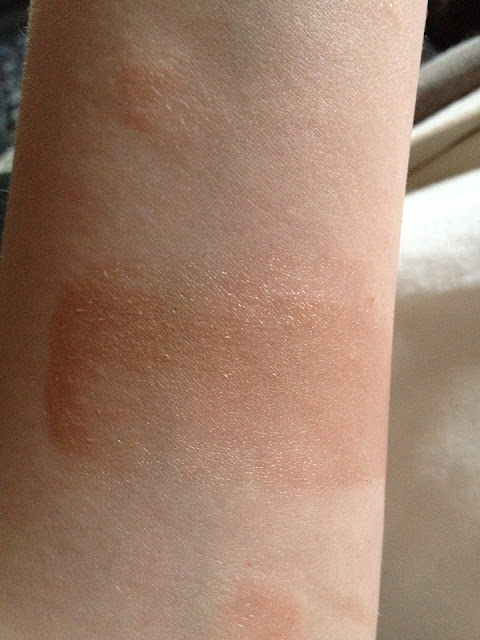 So this is after the swatch has been blended out slightly. You can see that it's a little darker than my natural skin tone but having tried it on my face (no pictures of that because I looked like death....plus my neck was swollen on one side....not cool!) I really didn't notice a huge amount of difference with it on just by itself. I do think that it would work as a really nice highlighter if you were wearing another bronzer already (like Hoola or Dallas) and it looked quite nice on my brow bone too. I like the fact that this is almost a liquid version of High Brow Glow as that really is one of my favourite products, but this is also fairly similar to Watt's Up too and I think I will always prefer that to Sun Beam simply for the fact that I find stick highlighters easier to use rather than liquid ones personally. I won't actually be keeping this because I know my sister loves bronzer (she has a darker complexion than me so bronzer always looks nice on her!) so as she's giving me a blow up bed to sleep on next week when I'm on training next week, she's getting this little freebie as a thank you! (Along with a harsh contender for a Crash Bandicoot evening!)

So what do you guys think? Yay or Nay on this new Benefit product? Any other products you would put this with to make the most of it?

Sun Beam is out nationwide on the 21st (possibly sooner if we get the stock in!) but is available on the website now for £18.50.

Product is a free sample as one of the perks of my job. However all reviews and swatches are 100% honest despite this.﻿