So this is a little belated because I've been mad at work/super tired after and haven't had the blogging bug recently so I've been spending my time chilling, knitting and having a mega sort out of my room! It's been very good for my soul and my room now reflects my happy brain instead of the old depressed one from last year (I tried not to be cheesy there but it's very difficult not to be when you're happy...who knew?! I've literally become one of those "half full" type of people....what the hell??? Haha!) I also managed to find a use finally for the worst Christmas present from 2012 that was "ordered from Spain" (a massive photo frame from the ex (who clearly got his Dad to use his discount in Dunlum Mill....just because it says "made in Spain" on the back doesn't mean you imported it yourself dude..), which would've looked hideous for it's intended use and didn't go with my room at all...I'm going to paint the frame but it's holding all my favourite postcards that I've collected over the years and looks awesome!) Anyway, I'm going to do a post on that later because I think it's pretty damn cool! So that was another little present to myself this year really! So people always start these things with the whole "I'm not bragging" thing...and the same is true for me too. I'm not bragging about the stuff I got, but I love seeing what other people got and therefore I love sharing what I got too! On with the pictures.... 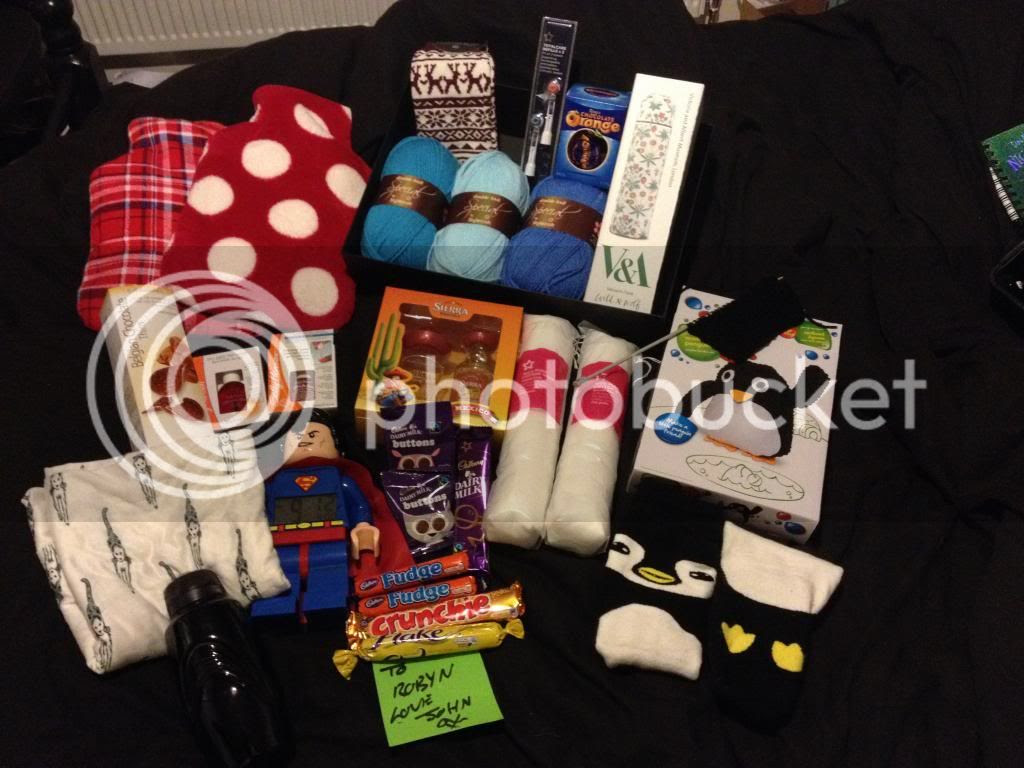 This is my collective Christmas day haul. No makeup at all! My family don't buy me makeup because a) I work for a company so they don't want to buy me something I can't wear and b) they all know I'll get annoyed that I could've gotten them discount! Haha!
So I got: 2 hot water bottles,
lots of chocolate, some Sally Hansen Insta-Dri drops and top coat, A cat scarf, a water bottle, a Lego Superman alarm clock, Tequila!, cotton pads, Wool for scarf making, a knit your own penguin and penguin socks! Love this selection and it shows how well my family/friends know me (one of my friends dropped over presents later and gave me a Lush Santa Scrub bar, a super pretty bauble, a candle and a body butter - all things that I love!) I know it might not seem like much to some people but I love everything in there! (The note that says "To Robyn Love John ox" is from my Step-Dad as I was having a moral crisis over eating the selection box that my Bio-Dad had given to my Sister to give to me (FYI he got her a designer bag...) so John took it out of the room popped some on a plate with the others round it and wrote that note so that it was technically from him so I could eat it without feeling dirty for accepting chocolate from a massive twat! Haha! This is why I love him more than my "real" Dad!) 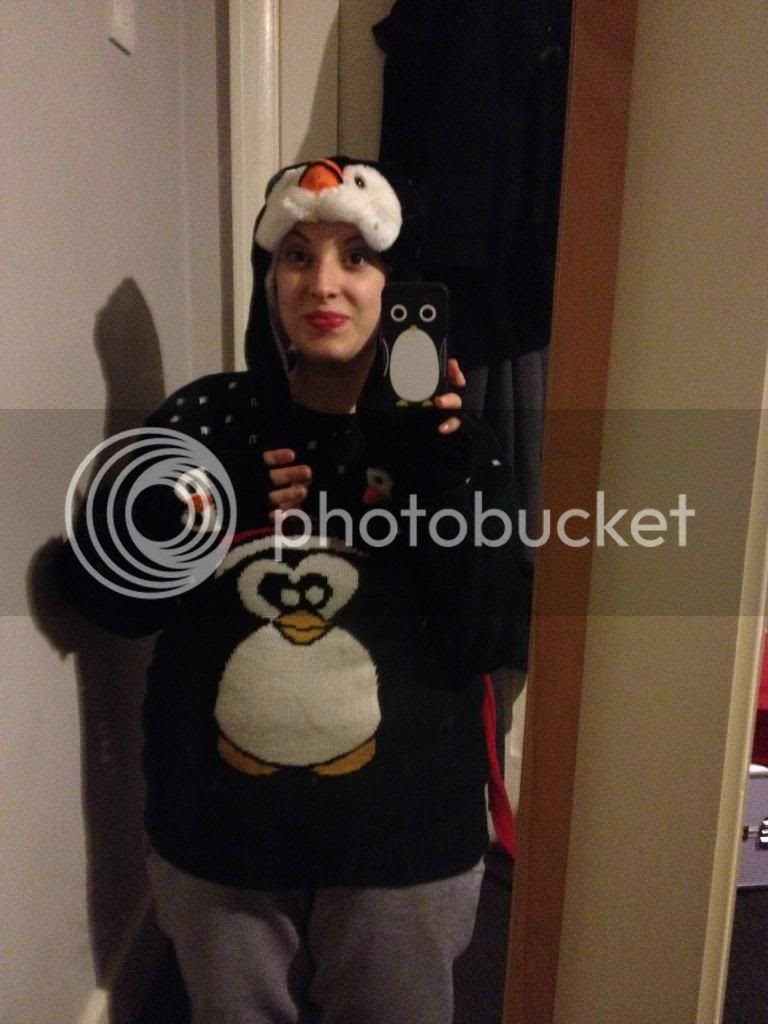 I also got a penguin hat, jumper, gloves and phone case! I'm gutted that I had already taken my penguin nails off by this point. So that's it for the Christmas stuff....onto the sale bits I got myself... 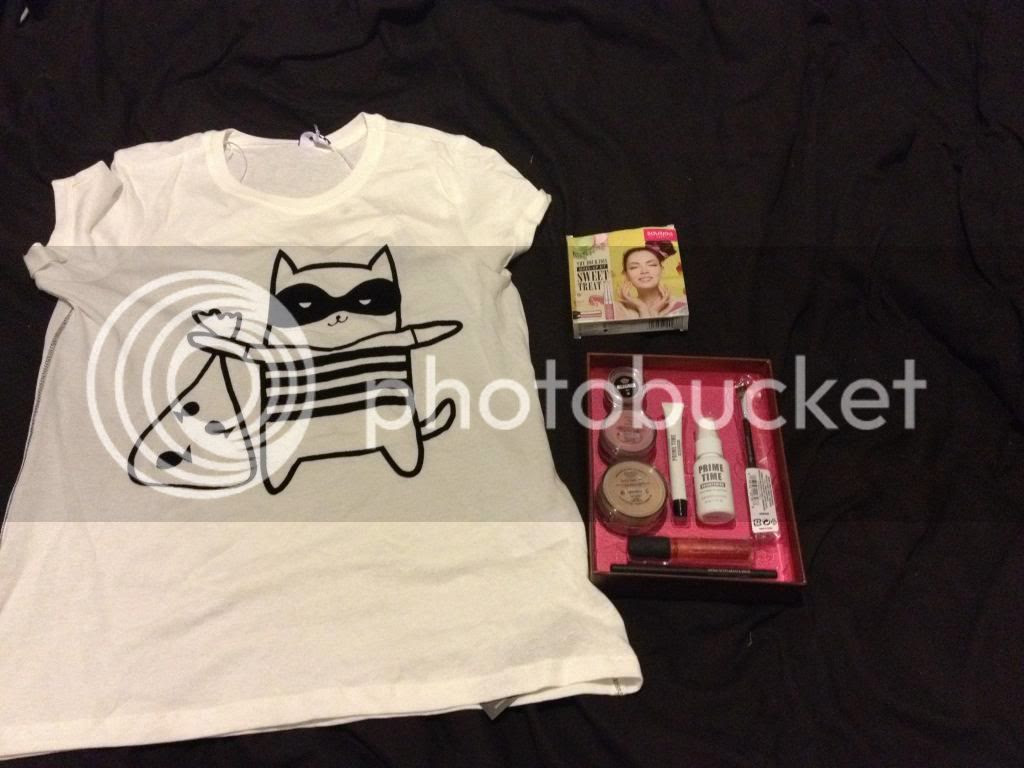 Henry Holland Cat T-Shirt. Well I just had to didn't I?! Plus the black bits are all in velvet...awesome! The Bourjois set I got in TKMaxx for £5!!! The bareMinerals set is the Bright and Beautiful set that is just £29 but contains all full size products and one double sized product! (which add up to £162!)  I literally couldn't pass this up! 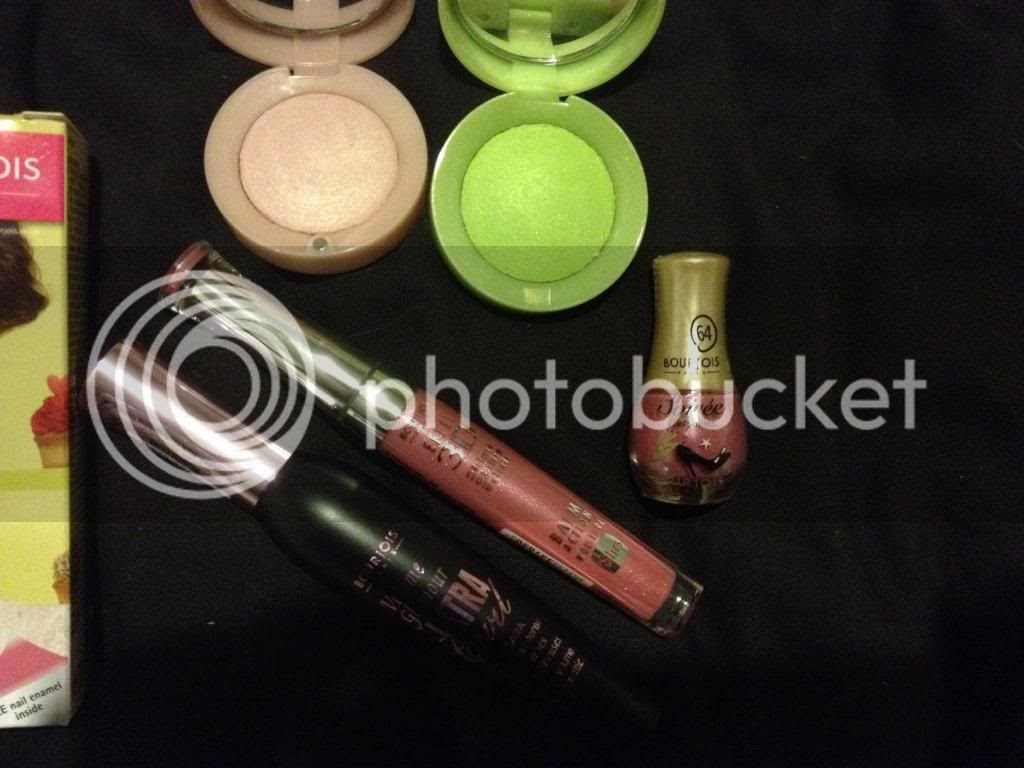 Ah, the reason for getting this Bourjois kit is for that little green round pot of eyeshadow. I've had my eye on it since it came out and to get it for £5 with everything else?! BARGAIN!! 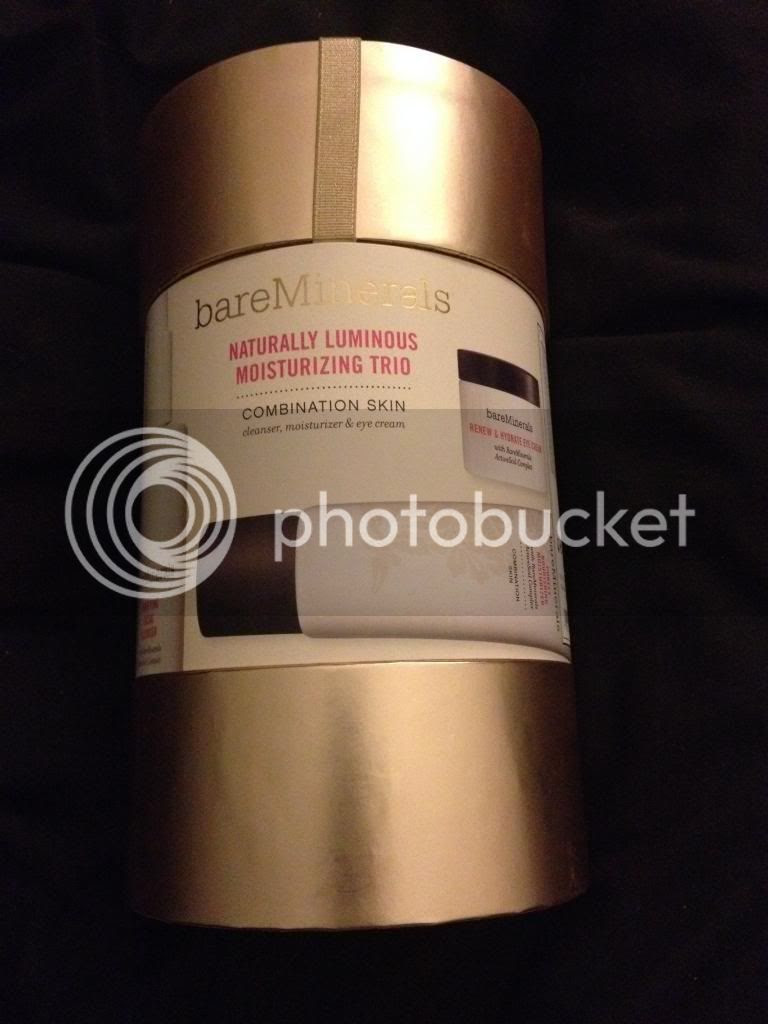 Just after Christmas my moisturiser ran out. Now then, I could've waited and got it on my super discount but I didn't want to use something else before then. These sets are £29 again but contain all full size items (worth £65!) and with my staff discount and £5 beauty card reward, was actually cheaper than my super discount! The cleanser and eye cream can just stay in the drawer until I need them too. 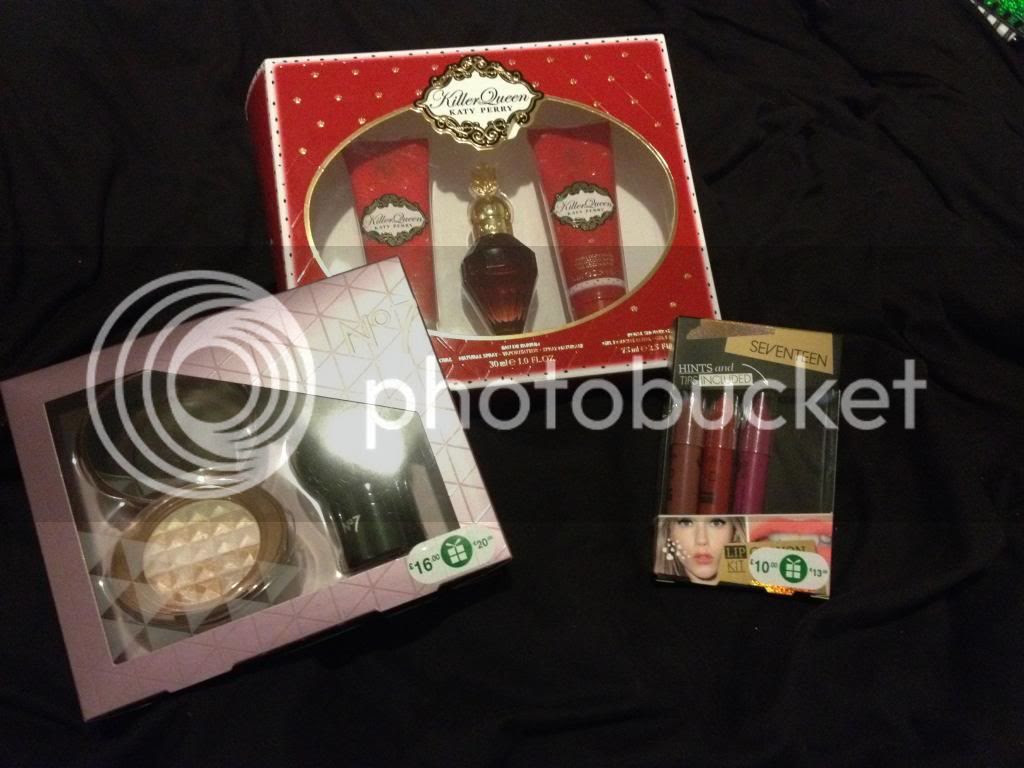 Boots always have an amazing sale on after Christmas. I had been saving up my Boot Points for this occasion and managed to nab a few great sets! I got my Mum a present for next year that she had been eyeing up and I got John (henceforth known as my Dad ok?) a whiskey set as he didn't get any for Christmas! For myself I nabbed a Katy Perry Killer Queen 30ml fragrance set (it smells really nice despite being a "celebrity fragrance") I'd tried it from a magazine thingy and fell in love so for £11.25 you can't complain for a 30ml EDP! The No7 highlighter I'd been eyeing up for weeks and hoped that it would still be in there for the sale. I went in at 9.30am as I was working at 10am so I had first pick almost! I was so happy to see this for 50% off (I went back later to pick up some slippers that I obviously forgot to photograph because I as wearing them....) and there were none left at all! I also picked up the Seventeen lip crayons for £5. I gave the orange one to my friend at work who looks lovely in orange. They are nice but not as nice as Chubby sticks to be honest... 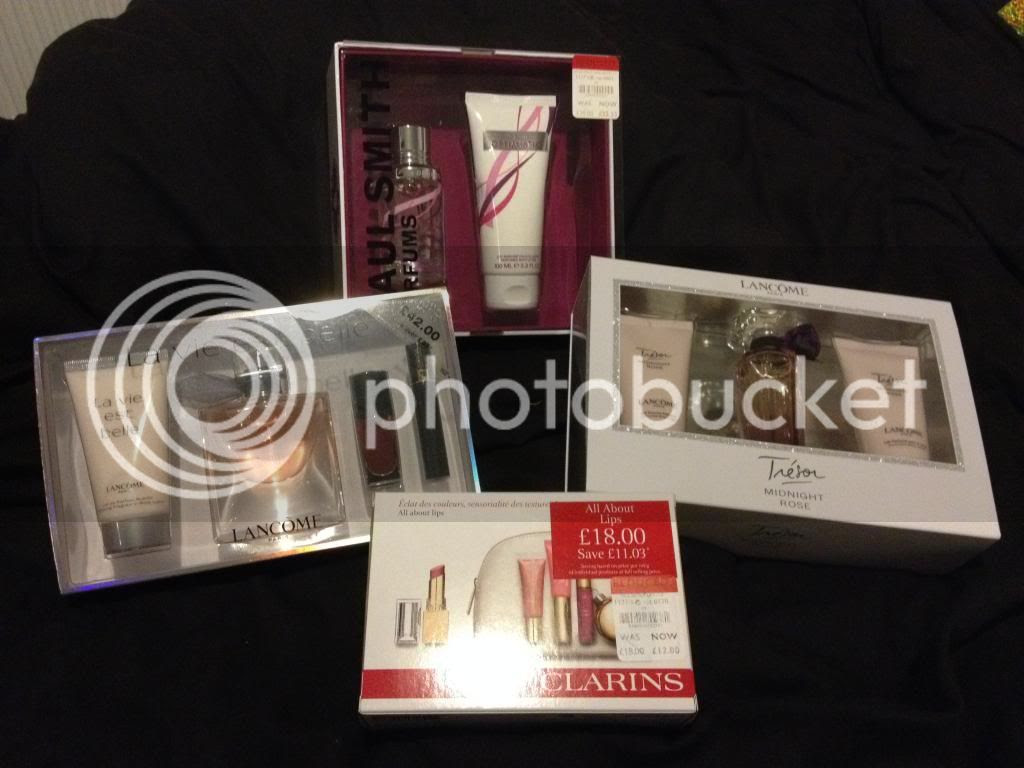 I picked up 3 Fragrance sets at work....oops.... Two Lancome ones (Tresor Midnight Rose and La Vie Est Belle) and a Paul Smith Optimistic set too. I justified buying the sets because they were SO cheap with my discount on top...and well....I needed them right?! I grabbed the Clarins All about Lips set too as an extra treat (because I clearly needed an extra treat right....) I shouldn't be allowed to work on Boxing Day again. 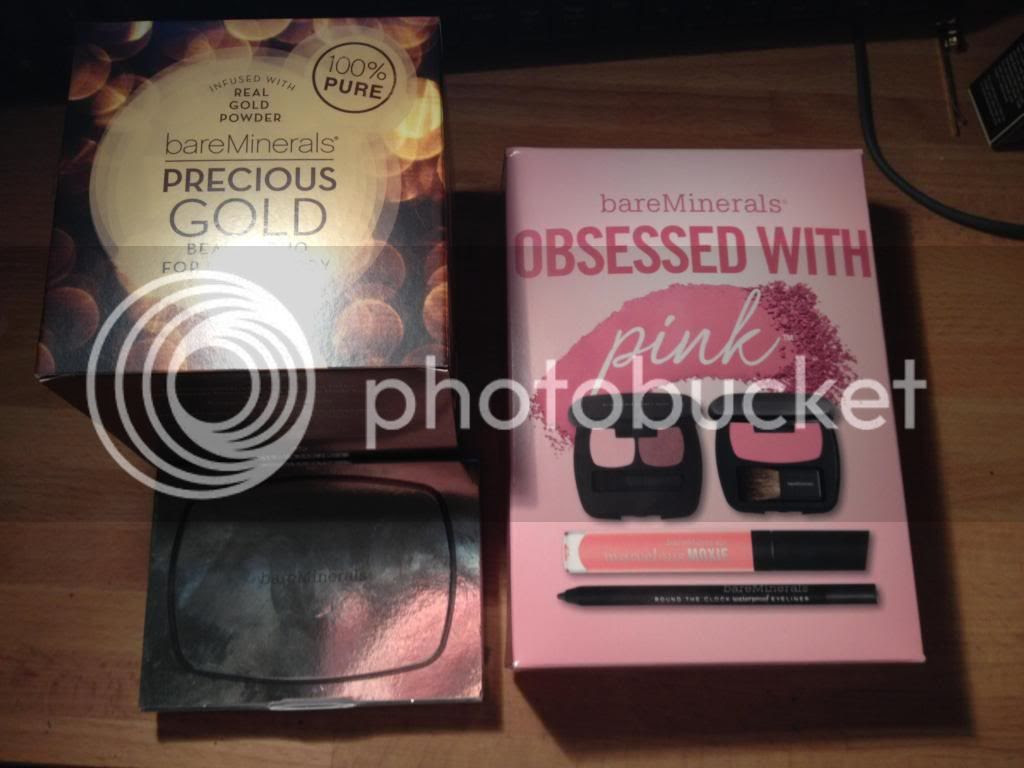 Around about the end of November bareMinerals staff get a list of bits that they can order at trade price that have been damaged or were "one time only"'s throughout the year. I wasn't super impressed with this years list to be honest but there were still 3 things that I decided to pick up (along with a few presents for others) 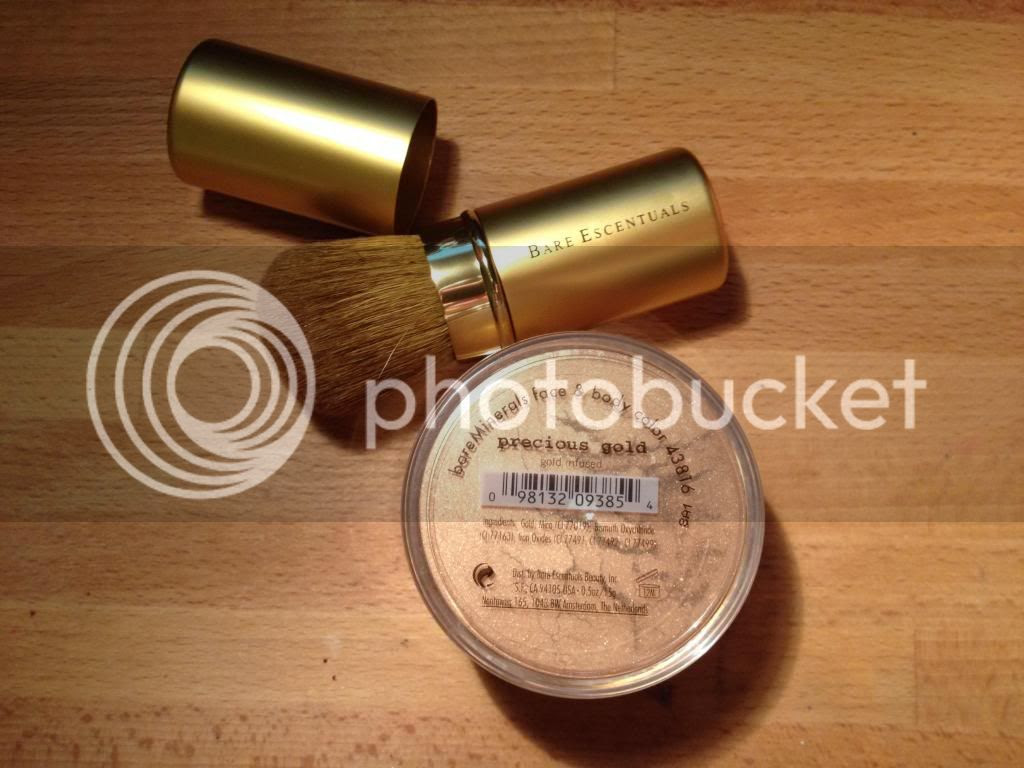 This was a whim purchase really. I love highlighters so thought I'd add another to my collection....turns out the real gold in this makes it SUPER shiny! It didn't cost much so I'm not that fussed as I love the brush and will come in handy in March when I go away. 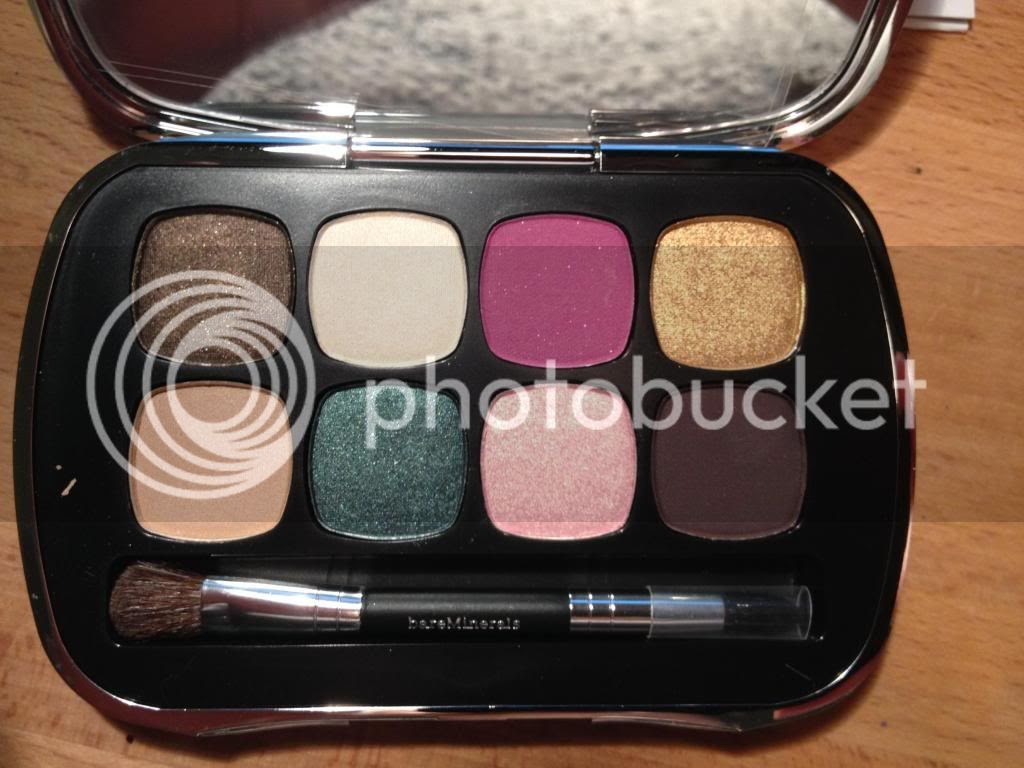 This is The September Palette....from September (shocker I know...) It was a limited edition and I kept looking at it every time I went to the Covent Garden Boutique....but I'm so glad I didn't get it last time as it was much cheaper on the staff discount list but just as pretty as i imagined! It's really pigmented and totally my colours! Look at the gorgeous purple and teal!! Ugh. Love it. 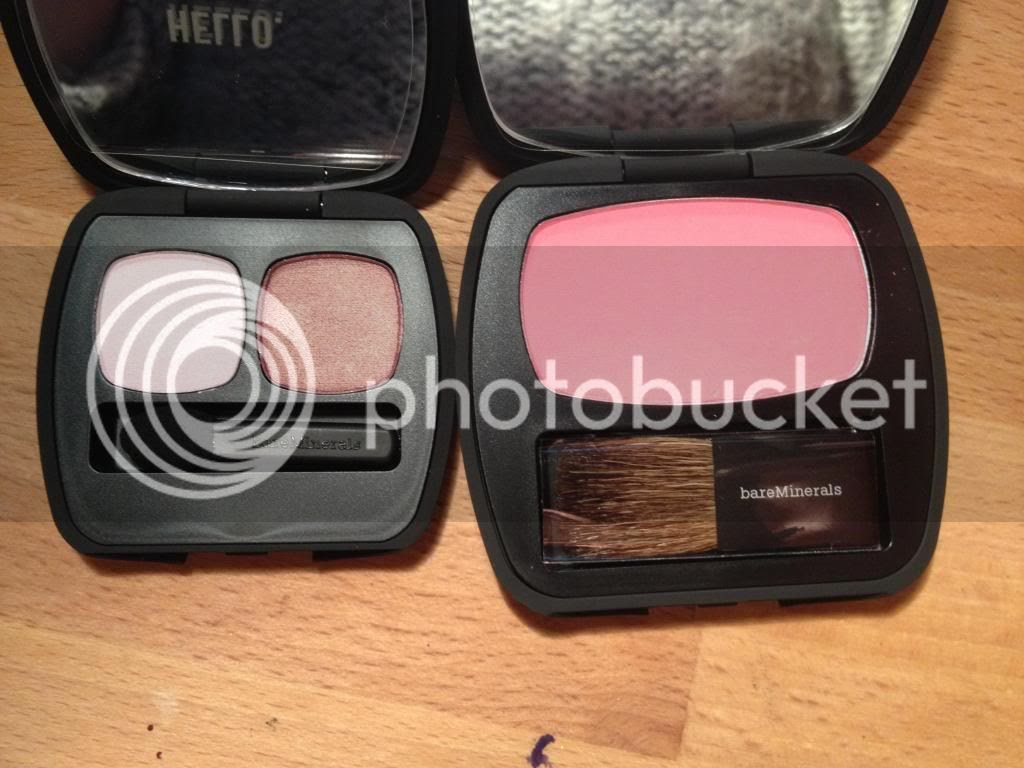 These two are from the Obsessed With Pink set. i kept looking at it when I had it on counter but couldn't justify buying it.....and then as i sold the last one, I had total remorse at not buying it! Haha! So seeing it on the list made me very happy! The eyeshadows are a beautiful pale and deep pink and the blush is my new favourite for anytime I'm wearing any pink at all on my face! It also came with an eyeliner that I already have and a lipgloss that I already have. The lipgloss went to my lovely Mum and the eyeliner is in a little package for a certain friend...


So that's my Christmas lot! I'm very pleased with everything that I got this year as it's all stuff that I wanted but kept putting off for one reason or another. I also love that I can almost completely dress in penguin related stuff now if I want...

What did you guys get for Christmas??

Until next time,
xoxo
Posted by RobynWBB at 19:13