Hello!
So I know its been a few months since I last posted anything on here and certainly longer than that since I last posted anything beauty related, but I had a little downturn with my depression and had to sort that out before being able to cope with anything other than normal life! Hopefully that's fairly sorted now so I'm going to make a real effort with blogging as I bloomin' love waffling about beauty and skincare!!! So, lets get on with the reason I'm blogging day...the MAC Mineralize Skinfinish in Lightscapade... 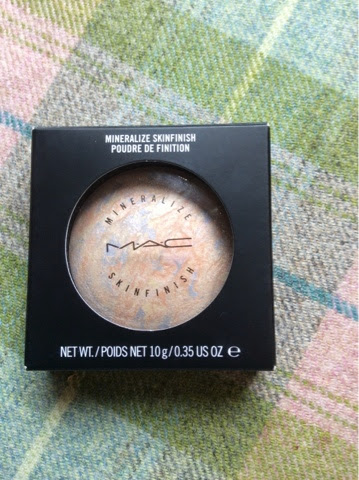 Is this not the most beautiful piece of makeup you have ever seen?? It literally made me squee with delight when I finally decided to go ahead and buy it! Now then, I'm not a MAC junkie who has to own everything by them, but you've gotta admit, they do know how to make products that are to drool over sometimes and for me, this is one of them! I love highlighters anyway but this just really is beautiful! One of the lovely ladies who used to work on Estée Lauder did buy me a highlighter as a gift that was called "Pink Buttercream" which is equally as pretty, but this one isn't limited edition so I don't feel quite so bad using it! 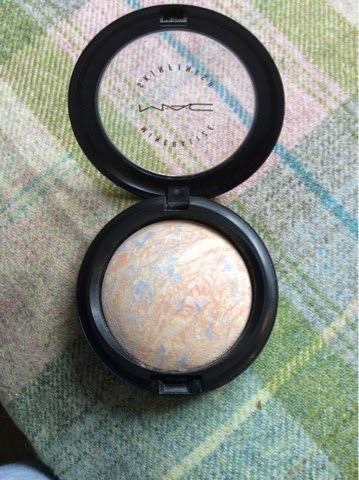 As always it's in that lovely MAC packaging that has a little button to press to open it. I like this because I always live in fear of breaking a nail on packaging that doesnt open easily (I'm SUCH a cliche girl when it comes to that aspect!!Haha!) I love the soft colours of the blues, peaches, pinks etc. It just looks so freaking pretty!! 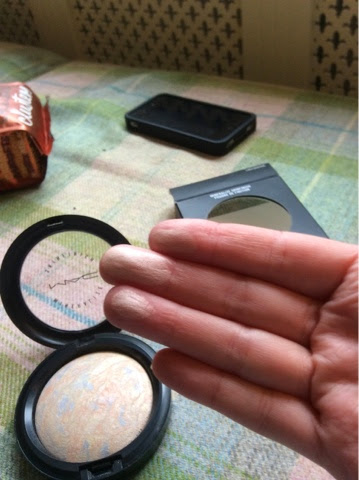 Swatches of it on my fingers for you all. Its got a slight silvery gold look to it almost which lends itself to being a great highlighter for all skintones I think. I think you're actually suppose to pop this on all over your face but I personally prefer it as a highlighter as it's subtle but noticable. 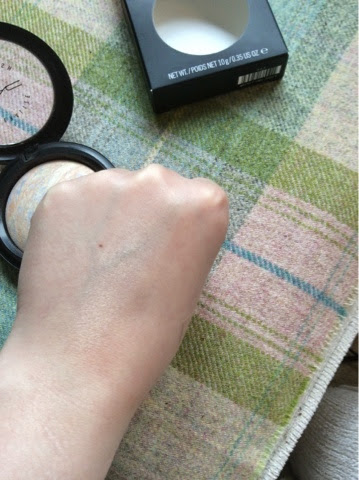 So as you can see in this swatch, the colours blend nicely to create that subtle glow rather than being too over the top. For me personally this has got to be my favourite highlighter I've ever purchased (although I'm sure I'll be saying that about another highlighter in the furture! I just love them so much!! Haha!)
MAC Mineralize Skinfinish in Lightscapade is normally £22* and can be brought online on the MAC store or in various different department stores.
So what do you guys think? Can you recommend other highlighters for me to drool over??
Until next time,
xoxo
*brought on discount for £7.70 (would totally pay £22 for this though!!haha!)
Posted by RobynWBB at 17:07