So last week I did these as a follow up to my Penguin Nails but I've been busy with family stuff so I've not really had time to do a blog post on them yet... I was going to do a proper step-by-step guide but, again, I've not had the time to recreate them (because I suck at remembering to take step-by-step photos at the time. I think I'm going to invest in a nail wheel so I can do a better step-by-step process for you guys! Something that Leanne recommended I do!) So forgive the fact that this post is basically me just showing off some super cute nails (not as cute as the penguin ones in my opinion...but that's mainly because I bloody love penguins!) 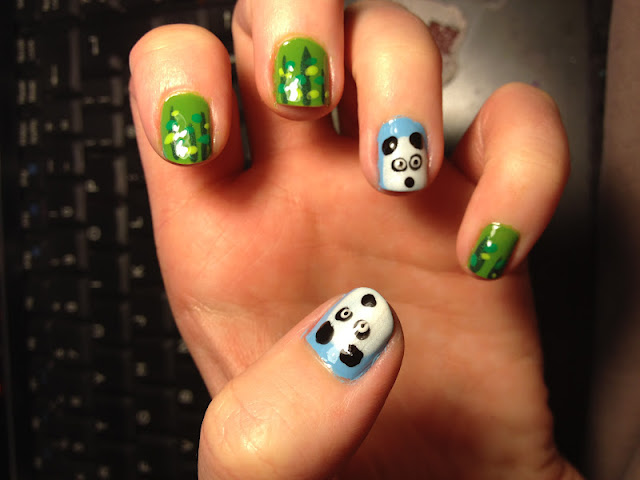 I'm not going to lie, as soon as I'd finished these I let out a little "squee!!!" because of how cute they looked!! 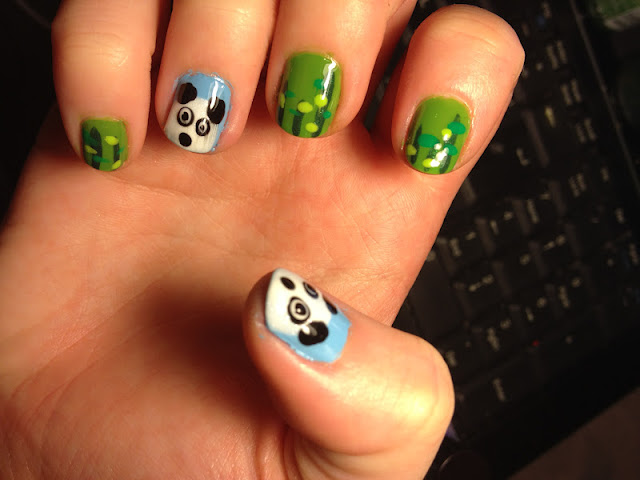 For the Panda nails - Barry M Blueberry Ice Cream as a base colour (2 coats)
ELF Nail Polish in White for the base colour of the Panda (1 coat) and for the whites of the eyes.
LCN Nail Polish in Free Your Mind for over the top of the ELF white for a bit of sparkle (1 coat)
Orly Black Out for the eyes and ears.

For the Bamboo Nails - Rimmel Lasting Finish Nail Polish in 236 Green Grass for the base colour (2 coats)
Revlon Matte Nail Polish in 032 Emerald City for the bamboo canes.
Barry M Spring Green for one colour of leaves.
Collection 2000 Hot Looks Nail Polish in Spangles (one of my favourite colours!) for another leaf colour.

For the technique I used:
Nail Polish brushes - Obviously the base colours can be painted on like normal and the panda faces in white were painted on using the normal brush that's with the ELF colour (you just have to be a bit more careful with this....also waiting until the base colour is dry is a must!)
Dotting Tool - I use one of my Mums old embossing tools for card making but you can pick up packs of dotting tools fairly cheap on eBay. You can also use kirby grips too as they have a nice rounded end to them. I like using my dotting tool though as it is double ended so it has one big end (very similar in size to a kirby grip) and a slightly smaller end for more precision based work. The smaller end was used for the whites of the panda's eyes.
Good old fashioned Toothpick! - I used this for the tiny black dots in the middle of the eyes but also for the all the bits on the bamboo nails. I painted half the stick and laid it on my nails for the bamboo sticks and then used another one and painted the tips of the stick and laid it on my nails for the leaves. It's not exactly the most precise technique in the world but I worked with what I had!

You can see from the pictures that a) I needed to clean up my nails a bit more before it was fully finished but I have this habit of taking pictures as soon as I'm done, rather than waiting for me to clean up properly (impatient lady right here!) b) I should've waited a little longer before I put the top coat on as there is a little bleeding on some of the nails and c) a toothpick really isn't that precise at all, but it does the job. I would've liked to have done the bamboo canes in brown but that is the one colour that I just don't own in my nail polish collection. I really need to get one so any suggestions would be welcome!

So what do you think? Any tips for the next time I try these out? If anyone would like a proper tutorial let me know and I'll get on to getting a proper nail wheel for a step-by-step guide for you! Have any of you tried panda nails before? I'd love to have a look at your nail art, so leave me links in the comments!