So I went up to London the other day for a gig and decided to pop into the BareMinerals store in Covent Garden to abuse my staff discount a little bit - I get 50% off in BareMinerals stores, which means I can get new products for cheap! Yay! I picked up a few other bits as well (a Multi Wrinkle Serum for me and a Redness Remedy for my Mum....plus a new lipstick for myself too....) The Neutralizing primer is a new product that launched last week and I've been waiting on my tester at work to try it out....but it didn't come in before I went on holiday. Boo. Anyway, this meant that when I saw it in the store I just decided to grab one on a whim as I was running out of my primer anyway.

The basic premise of this primer is: (from the BareMinerals website) "With its colour-correcting yellow base and light-reflective pigments, this innovative foundation primer immediately neutralises the appearance of discolouration, uneven skin tone and redness for brighter, younger-looking skin". Feel free to skip to the end for a summary of the good and bad points of this product if you don't fancy an in depth review! 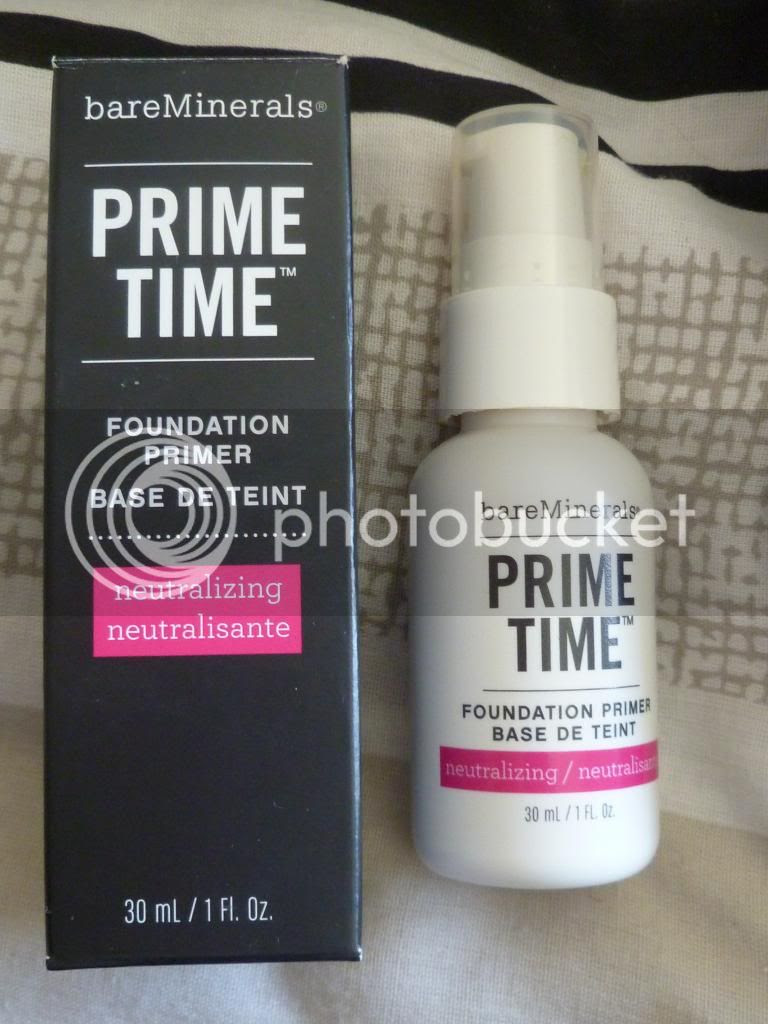 A quick bottle shot to show the fact that it's in the same sort of pump bottle as all the other BareMinerals primers. All are 30ml unless you buy the giant sizes that occasionally pop up on counter/on QVC (this one is currently on a giant size offer on the QVC website here) My only issue with the packaging is that they all look pretty much the same (except the Oil Control one at the time of writing - it's in a white box instead...) so if you aren't thinking, it's very possible to pick up the wrong one and only notice when you get home. It's a minor issue but one I've encountered a few times on my counter! (You may be able to see a smudge of yellow on the side of the cap...I have used this a few times so it isn't just a "first thoughts" review) 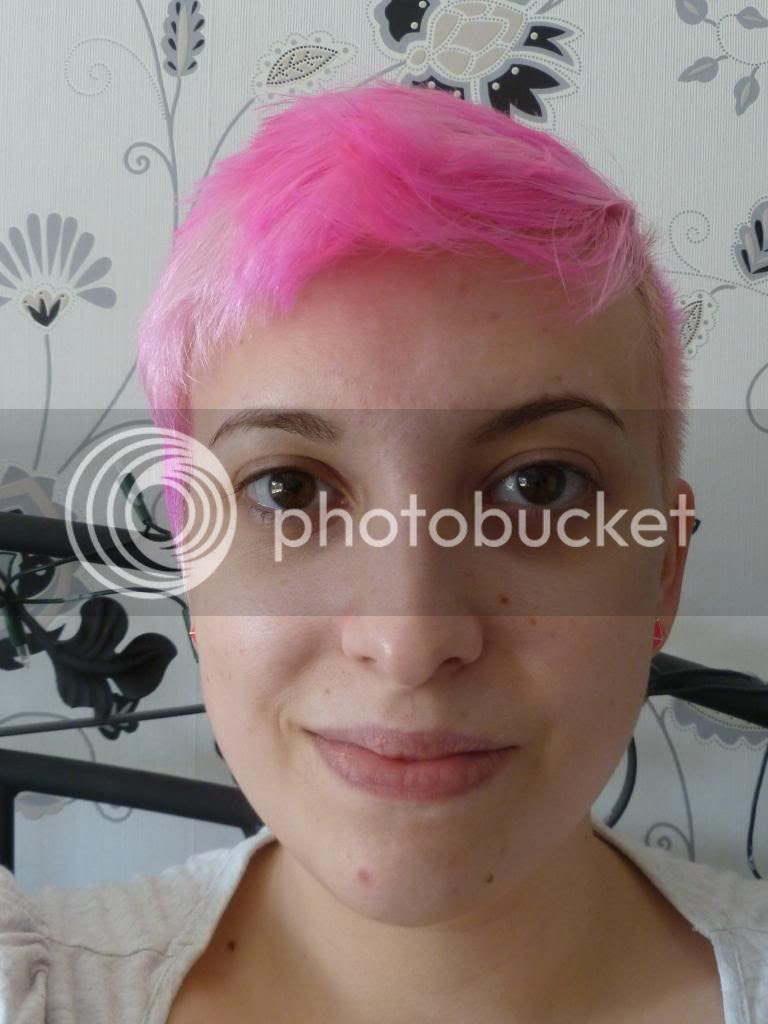 Here's a quick shot to give you nightmares....my face with no makeup! To be honest, if you've read my blog before, you're probably used to this beauty of a face popping up every now and then to scare you! Look at those bags under my eyes....and that blemish on my chin, not to mention the uneven eyebrows that I'm having to sport at the moment ...mmm...sexy! (I was determined to have an arch put in to my eyebrows by the way but it turns out I can't do it with one of them....now I have to grow the other one out instead! The odd things we put ourselves through ay?!) Anyway, this shot was to highlight the fact that my face does have uneven skin tone, dark circles and a bit of redness round my nose/on my cheeks/between my eyebrows. It isn't super intense redness, but it's enough for me to be aware of it. I do also suffer with dry skin on my cheeks (allergic to my own tears you see...so even if it's tears of happiness, it'll bugger up my skin for weeks!) that can occasionally go a bit flaky and my foundation will settle a little bit in it by the end of the day. 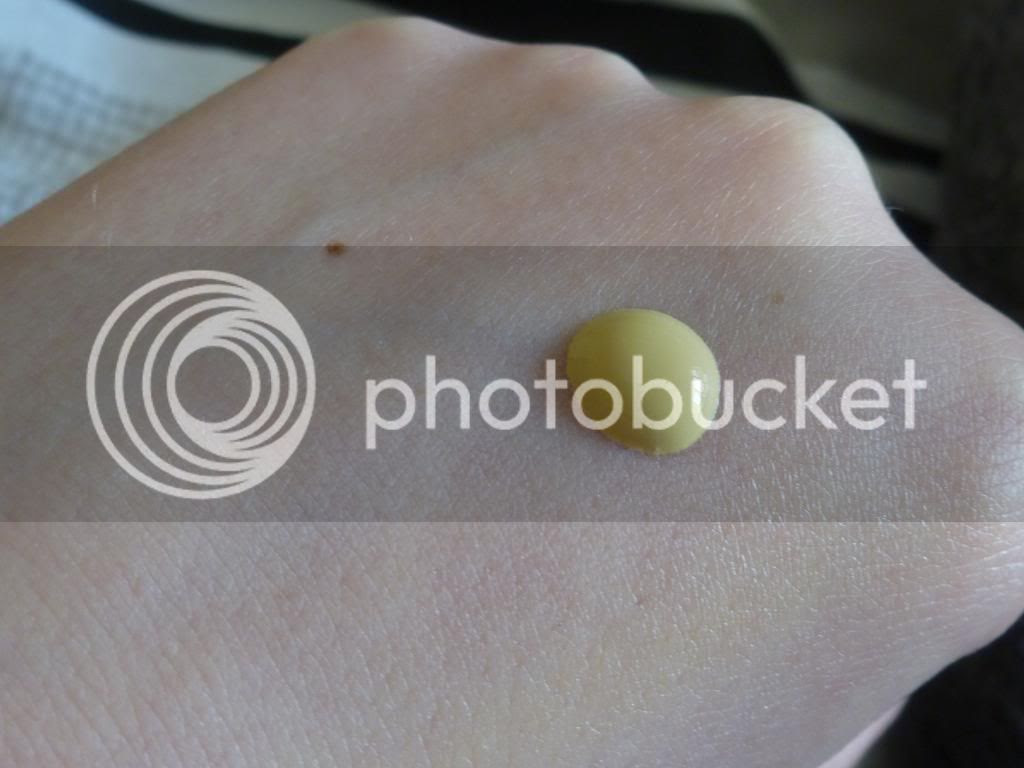 Product shot! I promise you that is the primer and nothing gross (I'm sure none of you were thinking that...but now you are right?!) Anyway, you can see it almost looks a tiny bit runny compared to the original silicone based primer...and that's because it's a water based one instead! I actually prefer this as I used to find that silicone one a bit...heavy almost - something I only realised after using this one really. The colour is quite an intense mustard yellow and when you first put it on...well...it was a bit "Oh....well I look very Simpson-esque..." so the key to this primer is blending it out. It took no time to blend out though so it's not like that was a hassle at all, but I feel you should be aware that it is highly pigmented to start with! I used this one pump for my whole face and then went back for a tiny bit more for round my nose area to really help with that bit of redness. Now then, I don't think this will get rid of all extreme redness completely but it certainly helps and awful lot (I tested it on my Mum who has quite bad redness on her cheeks) I actually found that I would've been comfortable leaving the house with just this on, which I thought was a pretty good testament!! I did test it with my foundation over the top too and I actually used less foundation than normal as I already had a bit of coverage on my redness, so I didn't need to put as much on which means my foundation will last longer now too! Bonus! (I will be putting a review up of my foundation in the next few days so you guys can see what it looks like with foundation over the top - I didn't want to bombard you with too many photos in one post!) 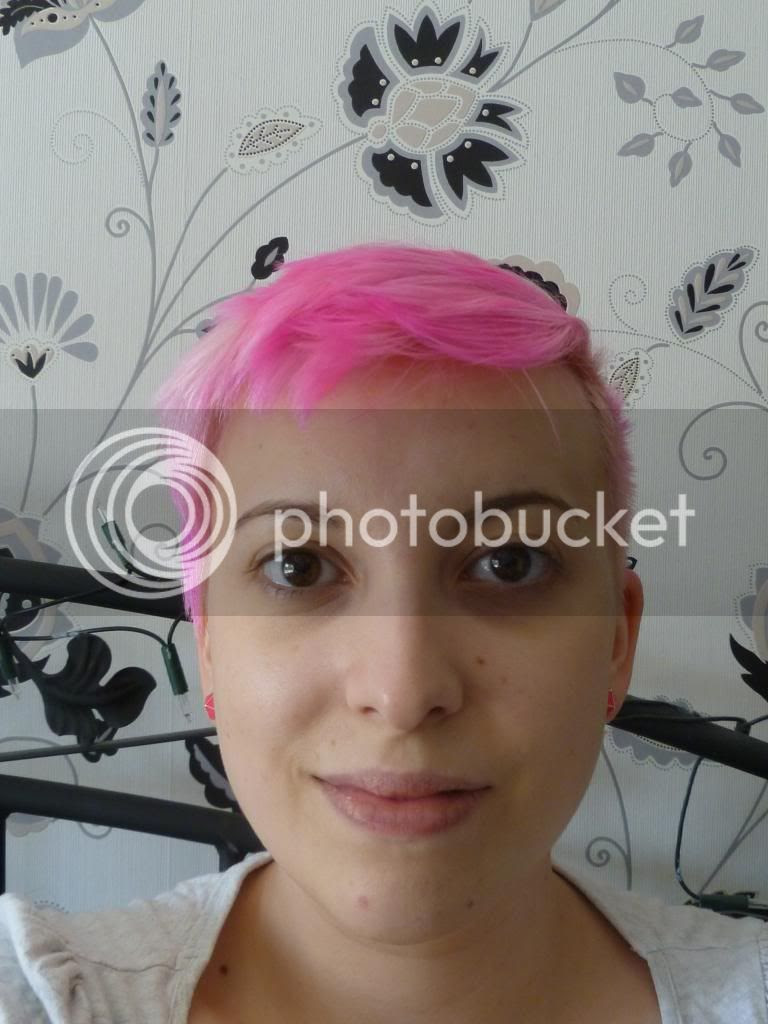 So in this picture I've put the Neutralizing Primer on the right side of my face (which is the left side in this photo right?? Quick poll - how do you describe that in your blog posts??) If you compare to the picture above, you can see that the dark circle under my eye has diminished an awful lot, the redness round my nose/on my cheek is practically gone and even the blemish on my chin has been dulled down! (And that blemish is really red bastard in the flesh!) All in all I'm really glad I picked this up on a bit of a whim to try. It's definitely the best primer I've ever used and my original silicone based primer will be taking a back seat from now on until I run out of this one. I just prefer the feeling and correcting tone of this one. The only thing I will say is that it does have a rather odd smell to it. I put this down to the iron oxides that are in it, but still....it's not a great smell to have near your face first thing in the morning. It's almost a slightly sterile smell...which I guess some people might like, but I'm not a fan! As for the claims that this primer also helps to brighten your skin, well, I genuinely think it does which is another bonus!

The Good:
The Bad:

Overall, the good definitely outweighs the bad with this primer for me! I think some people might be expecting miracles with this primer, but it's only designed to help neutralise redness and not hide it completely. I also think a few people may be a bit disappointed that the consistency isn't quite the same as the original, but for me that's a bit of a plus. I paid £10.50 for this primer but would definitely buy it at full price since trying it, which is £21 for 30ml (although I would always wait for a discount day in one of the many stores that BareMinerals is sold in! I know Debenhams have got a Mega Week coming up next week - 10% off cosmetics! I'm a sucker for discount!)

So what do you guys think? Does it make enough of a difference to my face for you to want to try it? Are you a fan of any other primers that you think I should try?