Review: Sleek Blush By 3 in Lace

So I've decided to do a few reviews on stuff in my stash of cosmetics. I figured I've got a lot of stuff in there that I've never reviewed and I'm a big fan of searching blogs for reviews of various items before actually buying (it's saved me from a lot of bad purchases in the past I think!!)

So first up is a review on the Sleek Blush By 3 in Lace. I brought this a while back when Sleek had 20% off on their website. Everyone seems to rate them a lot and I had some other bits by them that were good quality for the price, so I decided to pick up a few bits on discount.....this being one of those bits! Now then, Sleek do some amazingly pretty blushers and I found it really difficult to choose! I so wanted to get some more pink blushers but I have so many that I did the whole "I'll get something different and then regret it later..." thing. I do regret not getting a pink toned Blush By 3 as they have so many pretty ones to choose from, but I picked this one because it was more for natural looks as sometimes my pink blushers just don't look right with a nude lip etc. The one i picked up is called lace and contains the shades Crochet, Guipure and Chantilly. It's a very different blush palette for me and all the shades would work very well for a natural look. 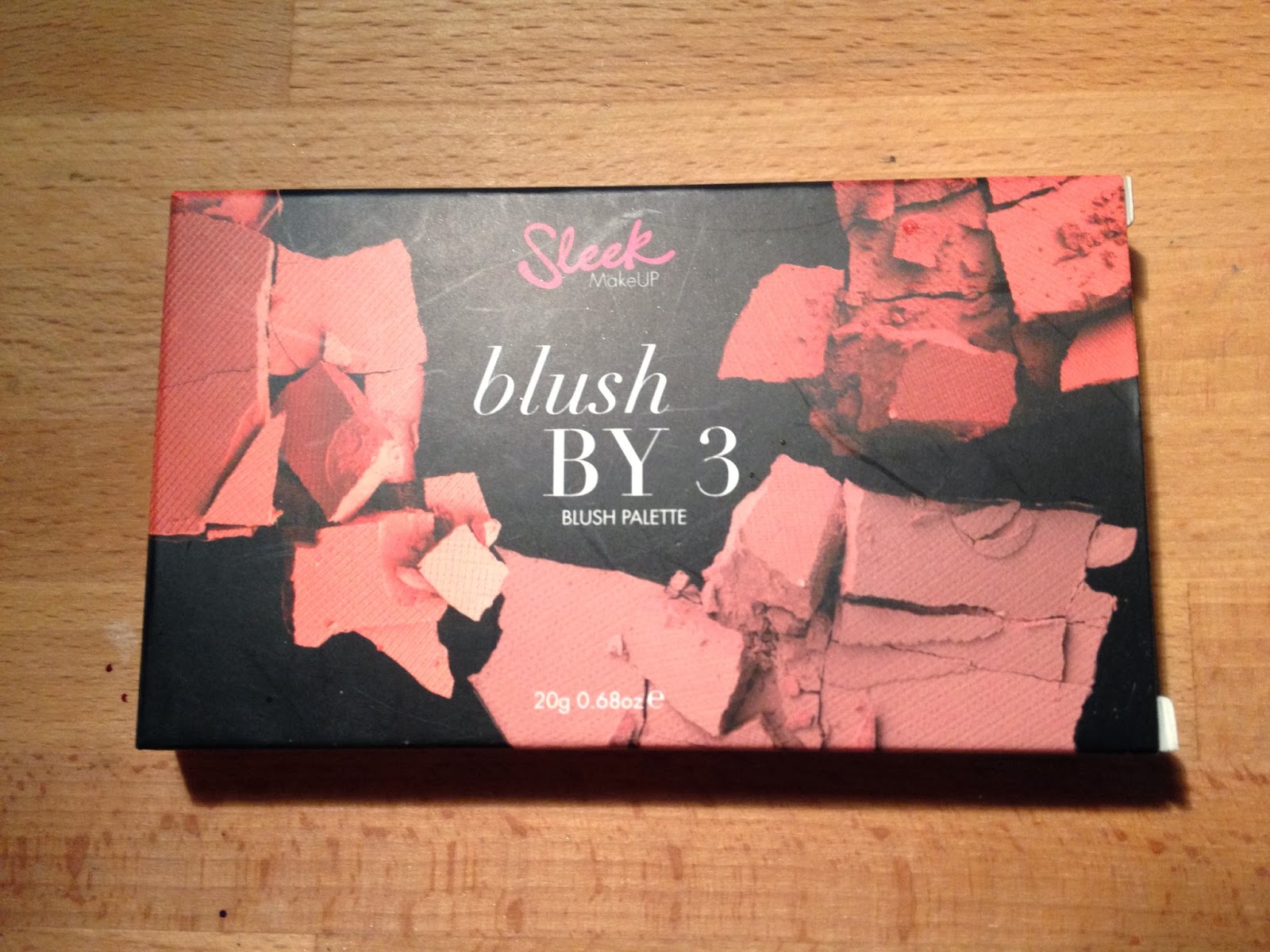 The outer packaging is simple but effective. It stands out from other highstreet brands and looks a bit more highend I think. 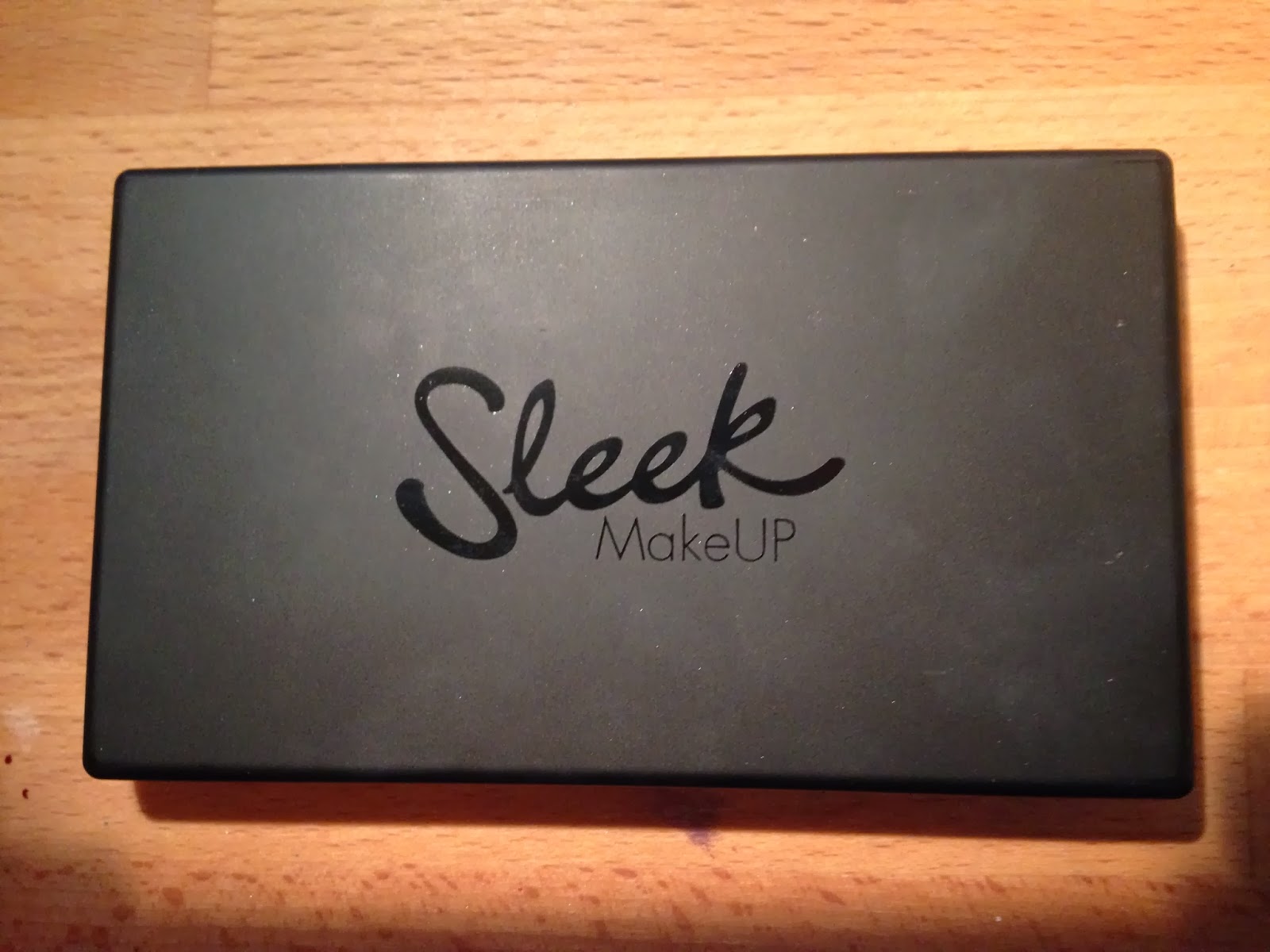 The Sleek packaging is...well....sleek! It's simple but looks good. And it's not rubbery like some highend brands so doesn't end up with thousands of finger prints visible on it! 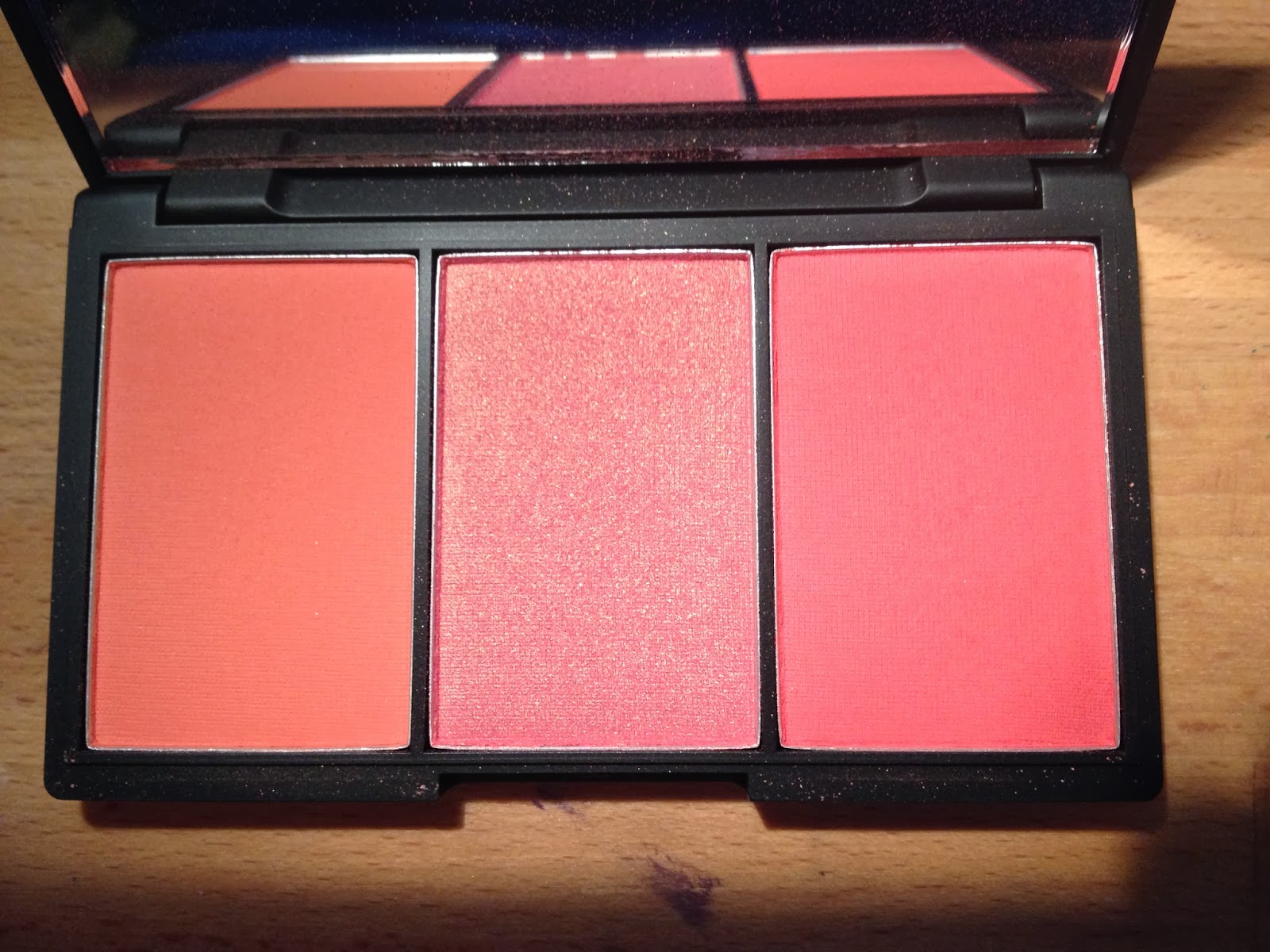 From Left to Right:
Chantilly, Guipure and Crochet.

When I first opened it up, I was very impressed with how much product you get in there. There each the size of a normal blush for a lot of brands. They were a tad brighter than I was expecting but still good colours for a more natural look I think. 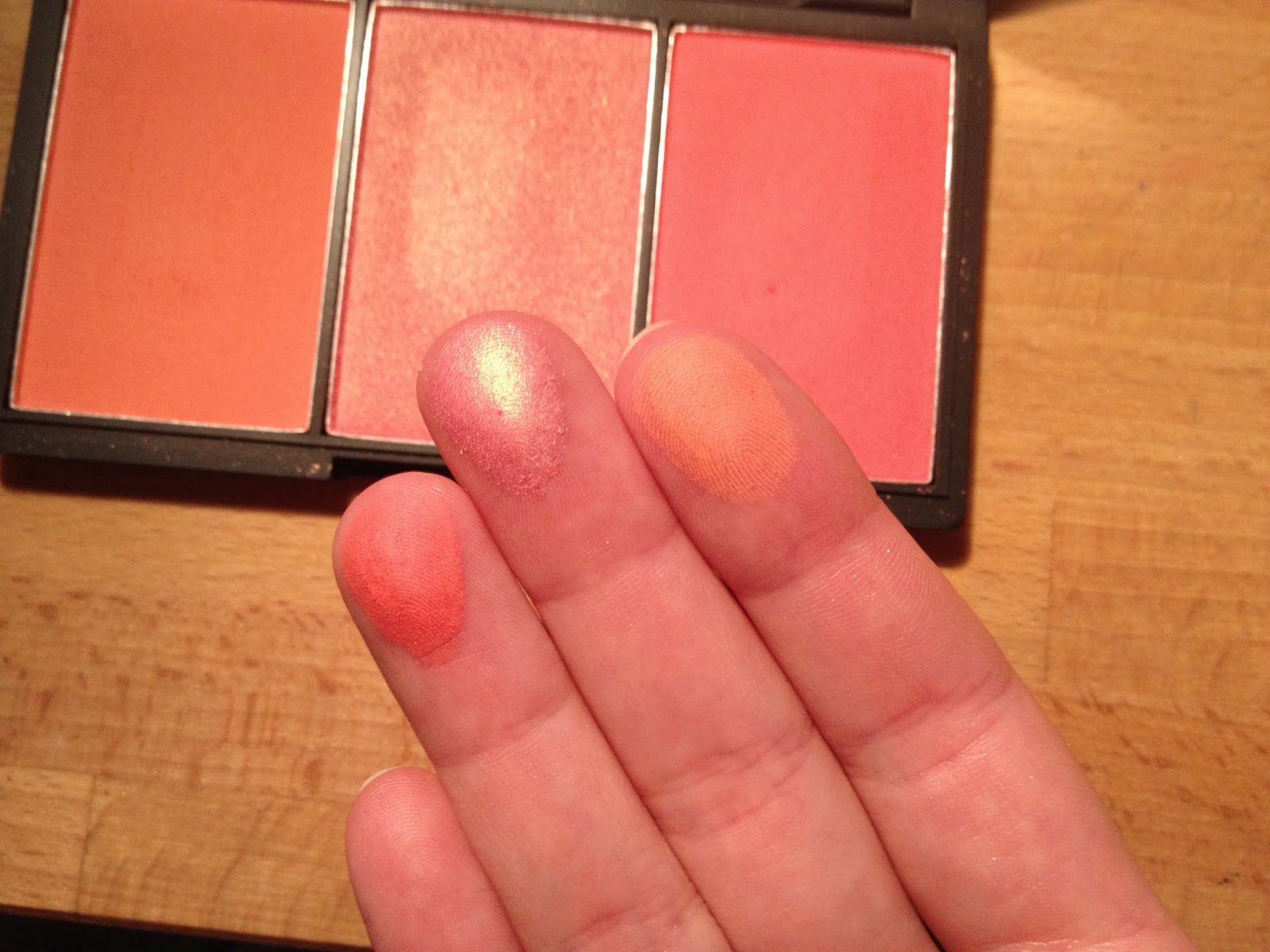 Swatches (reversed order from above...)

This is a swatch from one stroke of my finger on each blush! They are SO pigmented! I actually find them a tiny bit difficult to work with as I'm so used to a more pinky toned blush, which I don't mind a slightly heavier coverage from, that working with one that is orange toned is a bit of a learning curve! I like the way you get two matte shades and one shimmer shade in this so you get to have a play about with different looks. Also the shimmer shade works really well as a matching highlighter with the other two shades if you're light handed enough! 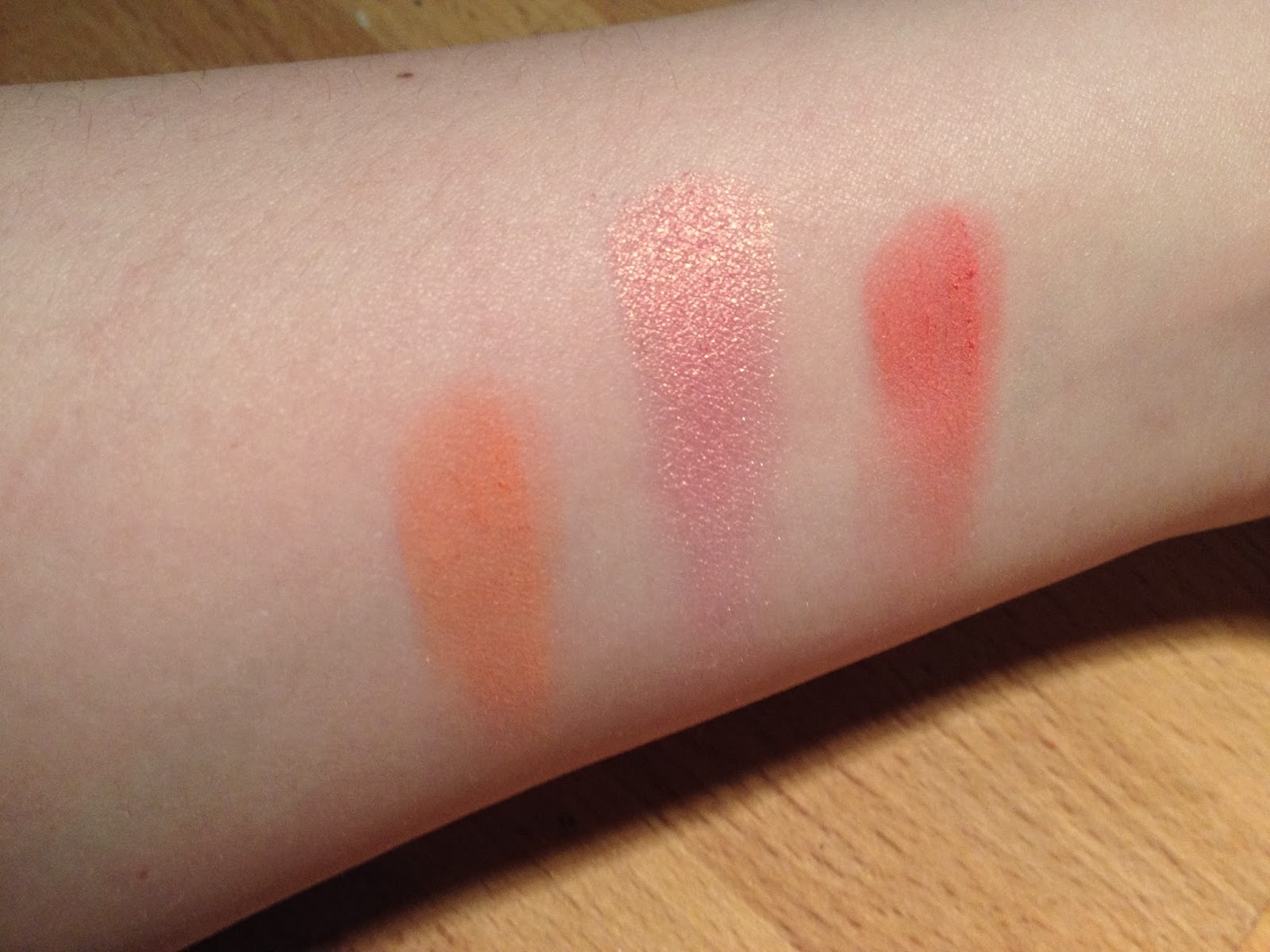 One finger swatches of Chantilly, Guipure and Crochet.

One of my most hated ingredients in cosmetics is Talc. It really annoys me when it's used as a filler as it makes things so chalky/drying on your skin. You can see with Crochet that the talc makes this one look a tad chalky on my arm. It's not so bad in blushers generally (in foundations it makes me so angry as it can make your face look so cakey!) but in stronger colours it can be a bit noticeable. As long as I didn't go too heavy with this colour it was ok. Any build up and it looked a bit heavy/cakey on my cheeks....also it looked SO ridiculous/funny on my as that colour is SO not what I normally use and made me look like Aunt Sally (google her) I really love the other two colours. Chantilly is a really natural toned blush on me and, again, as long as it isn't built up it looks like a really lovely colour...built up it looks a bit garish personally! Guipure is a beautiful rose gold kind of colour and really works as a highlighter for me but as a blush it's almost too pigmented for me to be comfortable to go out the house with it on. I felt a bit OTT when I wore this by itself. It works really nicely over the top of other blushers though as a highlight/accent shade.

Overall - I liked the packaging and general quality of the blushers but the colours were very intense for me personally. I should've stuck to "safe" colours. I can see me using Chantilly and Guipure but I'm not sold on Crochet at all! They lasted a long time on my face but would've need a touch up if I had worn them all day and was then going out in the evening. You have to be very light handed when using these as brushes pick up a huge amount of product if you aren't careful....not one for a quick grab and go for me!

What do you guys think? Have you brought any Sleek blushers (or other products)? Which Blush By 3 would you have recommended for me??

You can buy Sleek in some Superdrug and Boots stores and online at Sleek's website. The Blush By 3 is £9.99 and available in lots of different shades (I have my eye on Pink Lemonade personally....)