Hello!
Yesterday I caved and ordered the Hourglass Ambient Lighting Edit - Ghost from SpaceNK* despite resisting it when it was first released at Christmas as I had recently given away my Hourglass blush palette to a friend because I found the blushers too shimmery. So why did I buy this you ask? I wanted to try a bronzer by them. Why didn't I just buy a travel size one for £24? I have absolutely no idea. Honestly, quarantine has been so so bad for my bank balance because my mental health basically goes "you're depressed....buy something....that'll cheer you up!" which...you know...it does.....for 5 minutes....and then I buy something else to cheer me up again and its a vicious cycle that ends up with me owning a new palette that cost me £75.......bugger. (I did have £5 of N.Dulge points to use though.....so there's that at least................right?....) Anyway, enough self judgement...... 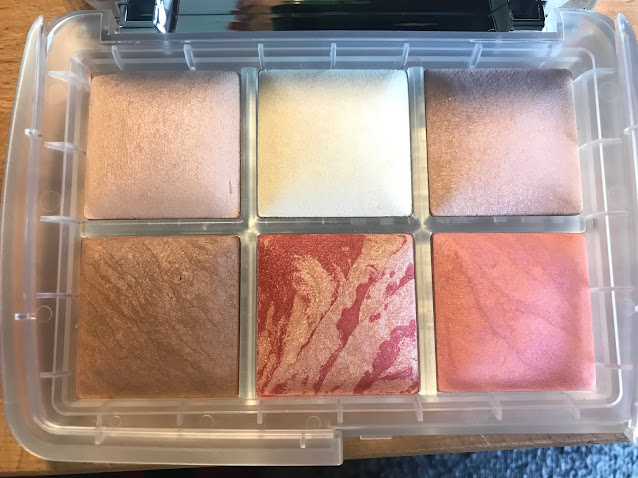 Left to right - Top Row - Finishing Powder in Dim Light, Finishing Powder in Diffused Light and Strobe Powder in Iridescent Strobe Light.
Bottom Row - Bronzer in Eternal Bronze Light, Strobe Blush in Iridescent Rose and Blush in Sublime Flush.
Now then, I cant deny that this is a damn pretty palette. My main issue with hourglass palettes is how they basically bring out the same palette each year with just SLIGHT differences which makes people like me think "oh....but its different to last years...." and then we buy them all because "THEY ARE DIFFERENT!" and we are weak. No judgement on the people who do buy all these palettes of course....I'm one of you, just not with Hourglass palettes (well....not yet anyway...) 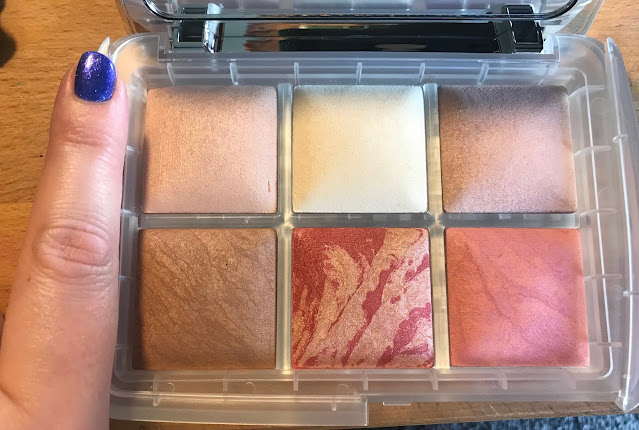 So that is my index finger for reference as to how small the palette it (and I have the hands of a twelve year old so the palette is really small!) For £75 you would want something a little bigger I think? When trying it out properly, I couldn't actually get my brush (bareMinerals seamless shaping and finishing brush for reference) into the individual pans that easily. Yes I could use a smaller brush but for bronzer and blush and a setting powder I need a fluffier brush so it's more diffused.....so that leaves one product in this palette to use a smaller brush with (which I did.) I do think the size of this palette makes it really good for travelling though....you know....when we can again! 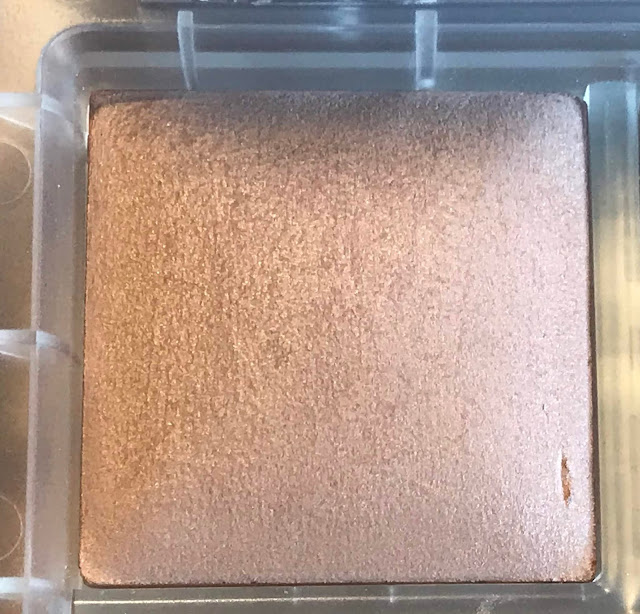 Close up of Dim Light.
Dim Light is the first of the two finishing powders. It has a slight pinky undertone which doesn't show up too much on my skin tone (pretty pale and pinky anyway) when dusted over with a fluffy brush. If used with a smaller brush it shows up with a bit of colour. I will say that it does give me skin a nice sheen but wouldn't replace my actual setting powder as it does nothing for my open pores at all... 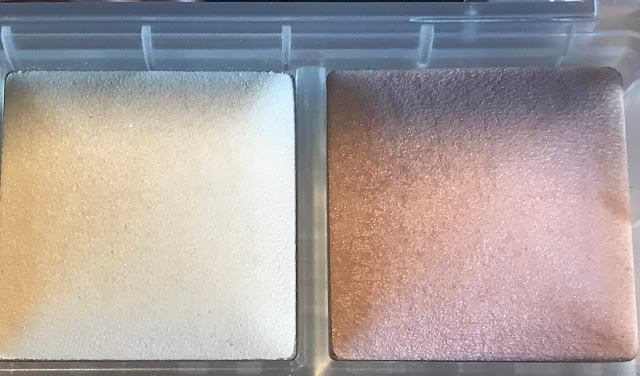 Close up of Diffused Light and Iridescent Strobe Light.
Diffused Light is a paler and more yellow finishing powder compared to Dim Light. Out of the two I prefer this one as there is no risk of me putting too much on and feeling a bit too tanned. Again, it is a pretty powder giving a nice luminosity but does nothing for my open pores up close. I do think this one gives me a more soft focus look from a distance though, which is always a good thing! Iridescent Strobe Light is a real winner for me! It's got a more apricot undertone and is good for my pale skin. It gives a really good wet look highlight to the skin, however it also quite glittery which picks up quite a bit in the sun. I can imagine I will use this as a great lazy day eyeshadow as well as its intended use. 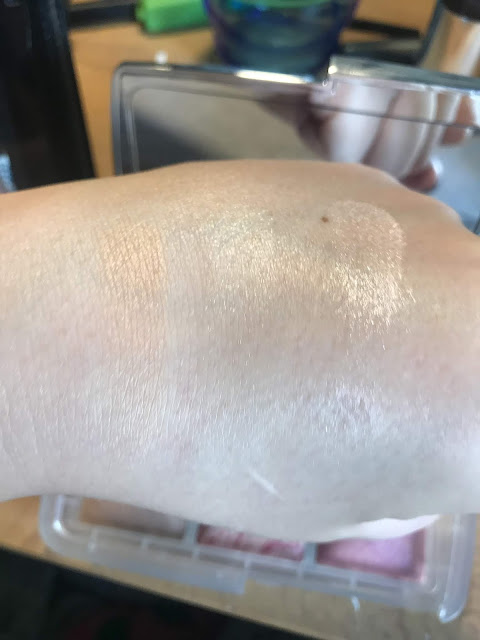 One swirl swatches - left to right - Dim Light, Diffused Light and Iridescent Strobe Light.
Not the best products to show one swirl swatches of but I do think you an see how pinky Dim Light is in this picture. 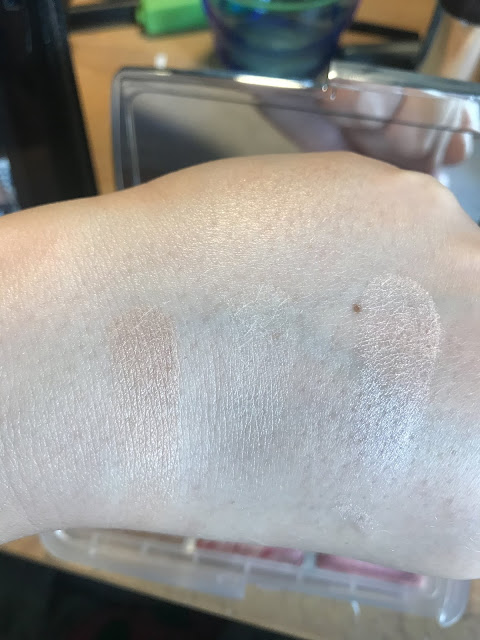 Swatches as above from a different angle...
You can see how much bright Iridescent Strobe Light is in this picture compared to the setting powders. 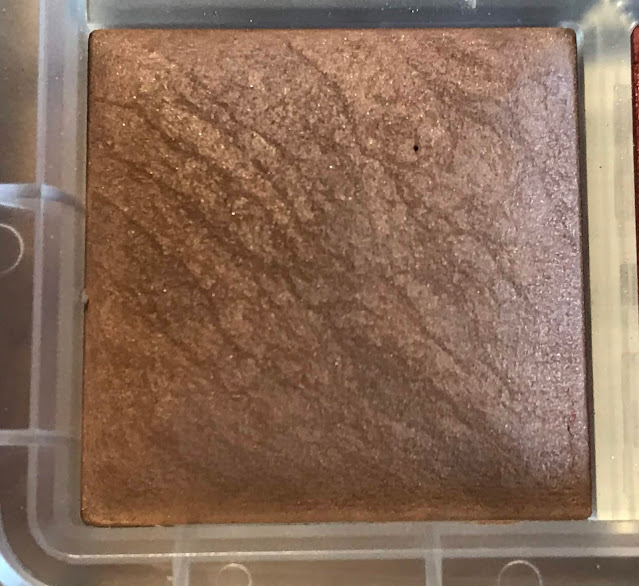 Close up of Eternal Bronze Light.
This is the one product that I was most interested in trying and boy it did not disappoint!! It's a really nice glowy bronzer that just made me look sunkissed and not muddy at all! It was very pigmented so I only had to use a tiny bit and could build it up easily too. I would definitely re-purchase this if I ever actually used it up. But I won't because I work in the beauty industry and own far too much make for one human. 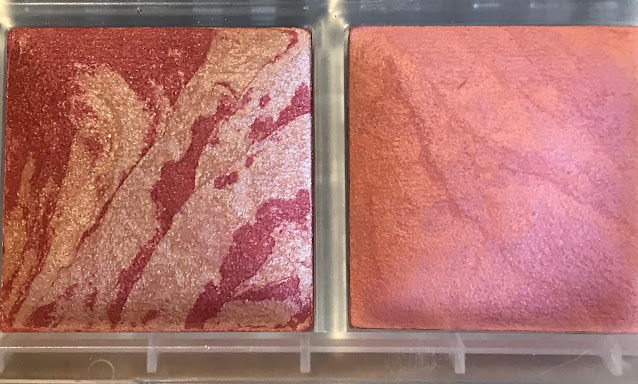 Close up of Iridescent Rose and Sublime Flush.
The thing I think everyone loves when looking at Hourglass are how pretty the veined blushers are. Even if you don't like a glowy blush, you're still drawn to these. Iridescent Rose is exactly what it says....its a rose colour with an iridescent sheen to it. It's quite warm toned so a tiny bit goes a long way. Sublime Flush is a lighter and slightly cooler toned pink. This is my favourite of the two because it just looks better on my skin tone. Not to say I won't use Iridescent Rose, but I have to be more careful with it so I don't end up looking like I've put my redness back on after covering it up with foundation! Both have a sheen to them but Sublime Flush is more subtle for sure. 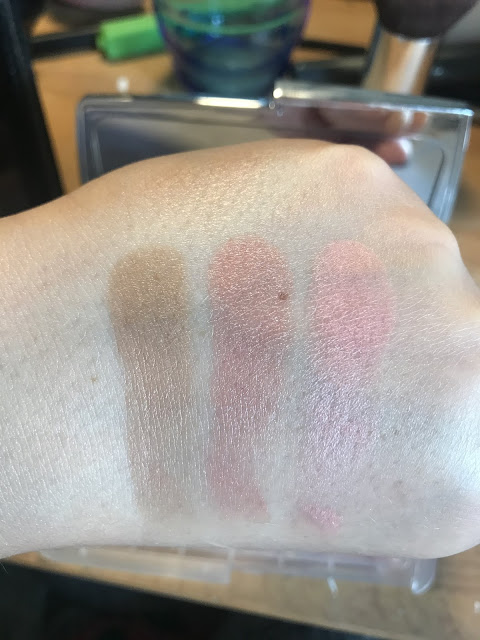 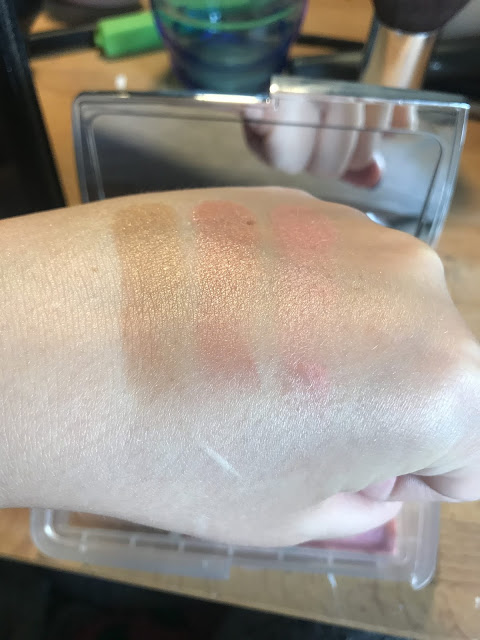 Swatches as above with more light on them.
Overall, I think this is a lovely palette if you enjoy the really glowy look. Hourglass is a brand that I want to explore more but their price point is just a bit mental really. I mean a palette that fits in my hand (remember...hands of a twelve year old....) for £75? The packaging is also made of plastic so it doesn't even FEEL expensive? Handy for travel, but for the price I'd just want something a bit more weighty. Would I recommend this palette? If you want to spend £75 on a boujee glowy palette, then absolutely. Do you need it in your life? Probably not. Am I sad I spent £70 (£5 N.Dulge reward remember!) on this? I feel like I should be but......I'm just not at all!!
Price: £75
Limited Edition: Yes for as long as they have stock I guess?
Weight: 6x1.4g
Price of each pan: £12.50 - The travel size bronzers and blushers are £24 for 1.3g each so I guess you could say this palette is a bargain? If you got the minis of each of these (they don't do minis of all these shade though) you would spend £144.....which is almost double the amount of this palette! (This is exactly how I justify my purchases FYI......)
Best for which Skin Tone: Definitely fair to medium. I can't imagine any of these shades working on tan to dark skin tones - the downside of pre-made palettes a lot of the time still.
What do you think? A waste of money or a boujee 'bargain'?
Until next time,
xoxo
Product paid for by me!